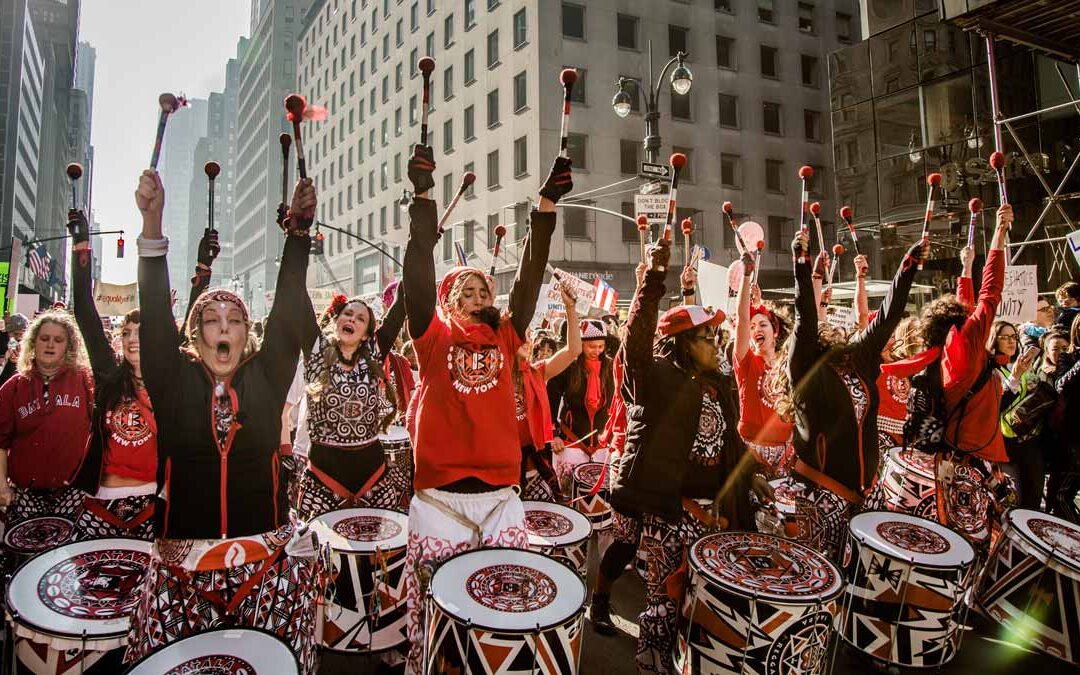 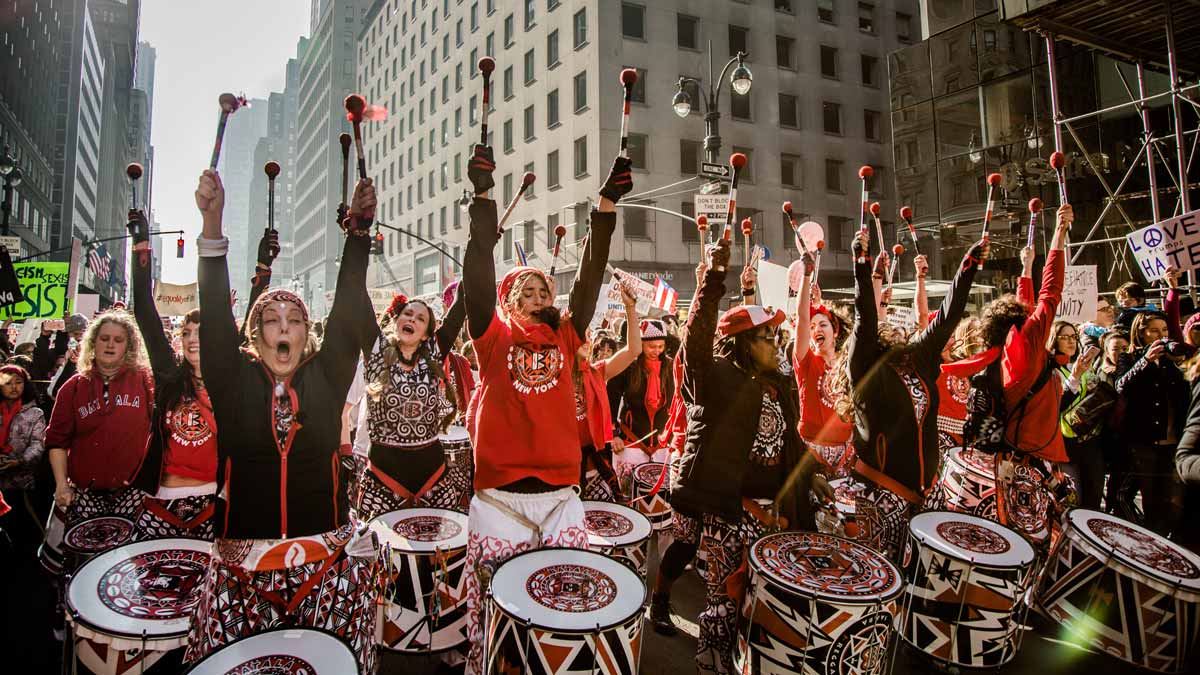 People, predominantly women, are looking for some sort of outlet to express what they’re feeling and how they’re dealing with current events. Batalá New York is providing just that: a true awakening to the women playing the music and for the audiences lucky enough to see their shows. Batalá New York is part of a global arts project made up of over 30 bands around the world. The music of Batalá originated in Salvador, the capital of the state of Bahia, in northeastern Brazil. New York’s all women afro-brazilian samba reggae percussion chapter has performed at Brooklyn’s Curl Fest, NYC’s Women’s March, and Make Music New York, to name a few. Batalá New York’s directors, Deinya Phenix and Laura Torell, let us crash their rehearsal space in Williamsburg on a sunny Sunday afternoon. Over the course of two hours, we danced while they were practiced, chatted with some of the musicians, and even got to play a few songs with them.

Thanks for letting us crash your band practice! The energy in there was incredible. Everyone had a beautiful, genuine smile on their face. How would you describe your rehearsal?

Deinya: I like to use the Brazilian Portuguese word axé coming from Ifá religion. It means divine, creative energy.

How long have you both been doing this?

Deinya: Well, in this band since 2012. I used to do folkloric dance including Afro-Brazilian dance and samba. And I’ve been doing that pretty much since 2006.

Laura:  I’ve been doing this since 2012. So, five years I’ve been playing Brazilian percussion since 2007. I started off with samba and I played with various samba bands. I’ve played a couple different genres in Brazilian music. I dipped into a little bit of Samba reggae during that time, which is why this transition felt really good.

Batalá’s vibe is empowering women all the world. Are the groups always women-based?

Deinya: What’s interesting about all female bands is that only two of them are female led: New York and D.C. Drumming is often dominated by men. An all female Batala group is focused on female energy that eclipsed in a mixed gender setting. It creates a positive space for women. Women tend to be braver in the context of other women. Take more risks creatively around other women. Half of us have traveled to play in other bands, some co-ed of course.

What does the word “awake” mean to each of you?

Laura: In terms of what we’re doing here, a key thing is that we are bringing in people who have had perhaps no experience, or very little experience in playing music, or drumming. I would say more often than not people come in with no experience. It awakens a sense of creativity, that musicality that may have not existed before. That’s what happened to me when I first started playing Brazilian percussion with other groups. I hadn’t done it before at all. I didn’t think I could do it, and here I am 10 years later leading this project.

Deinya: I took a few percussion classes here and there but I never considered myself to be a percussionist until Batalá. So I’ve been waking up to a shift in identity. Batalá, more than any other project I’m involved with now, has connected me with my ancestors. Including those who have brought African religion, and traditions from the motherland to the Americas. I travel to Brazil often and one thing I’ve noticed since participating in Batalá is that the African traditions are expressed differently in each place where slaves were taken. Brazil happens to be one of the most conscious places as far as the African traditions of my ancestors. Connecting with this music has awakened a consciousness in me, a racial conscious that I didn’t have before.

Batalá uses five different drums. Can you tell me a little bit about the significance of each drum? Why are there five?

Laura: The five drums comprised of five different parts so that they all connect into one arrangement. We have the surdo 1 and 2 which provide the bass. I would say the surdos are the wheels and the caixa is the engine.

Deinya: We also call the surdos the heartbeat. It’s a single beat for the heartbeat. One, two, one, two. With that heartbeat going, the band feels like it has life. The dobro plays in between the heartbeat, almost like a breath. The repinique resembles the African djembe drum. It’s one of the hardest ones to play because it’s very loud.

You need extra earplugs for that one?

Deinya: You definitely need extra earplugs. But also for women, in general, being loud is difficult yet so necessary. Another form of awakening comes from women playing this repinique drum. It’s a master drum and here we are – women – playing it. Where the repique often calls and the dobra will respond or the other way around. They interact a lot. And this is the heartbeat of the engine going the whole time.

Laura: Yeah. It is also interesting when you go to Batalá worldwide you see that the repinique and the caixa are primarily played by men in co-ed environment, whereas the dobras are played primarily by women. Surdos are kind of a mix. I started playing dobra, because I used to play a similar drum in samba, and I wanted to learn the repinique because I wasn’t seeing a lot of women play this drum outside of the context of an all women band where by default all of the women play all of the drums.

Deinya: I also feel like playing the repique I’m serving my space.

Laura: Yeah. Because it’s a call thing. I love that in Rio style samba all the calls are done by repinique. It’s like you lead and then it responds. So, it’s nice to put yourself out there.

You all wear red, black, and white when rehearsing and performing. What’s the significance in those colors?

Deinya: Like I mentioned before, a lot of African traditions were brought to Brazil and the Americas. They’re often expressed and reinterpreted through popular music formats and aesthetics. The colors are often connected to the Orixas, which are deities of the African religion Candomble. White and red together are the colors of  Iansa and Xango. Iansa is a female Orixa that is connected and syncretized with Santa Barbara that is the goddess of sacred thunder, lightning storms, and hurricanes. The red and white are also connected to Xango who is the god of thunder and lightning. The colors red, black, and white together are associated with Exu a trickster deity. So those colors are meaningful to us, but they’re also high contrast and energetic.

If anybody wants to get involved in Batalá, how can they?

Deinya: Yeah. If you use “dot com” it will still connect, but we love to say “dot love.”

Every few months we are tentatively open to new members. It just depends on what we need. Some have little to no drumming experience, while others have been drumming for years. These women come from all walks of life.

What’s the age range of your group?

Deinya: Right now, we have about 45 women age 20-68. There was a time when we had someone as young as 11 in the band, my daughter. Most of the women involved in Batalá are in middle class. I really want to expand our community to other cultures and classes. We’re doing workshops in The Bronx and the Lower East Side to branch out our membership. If I had been caught by a movement like Batalá when I was younger, I’d be so much better for it. I want to offer this opportunity to younger women, especially younger black women.