Rooted In Our Roots: A Black Hair Journey 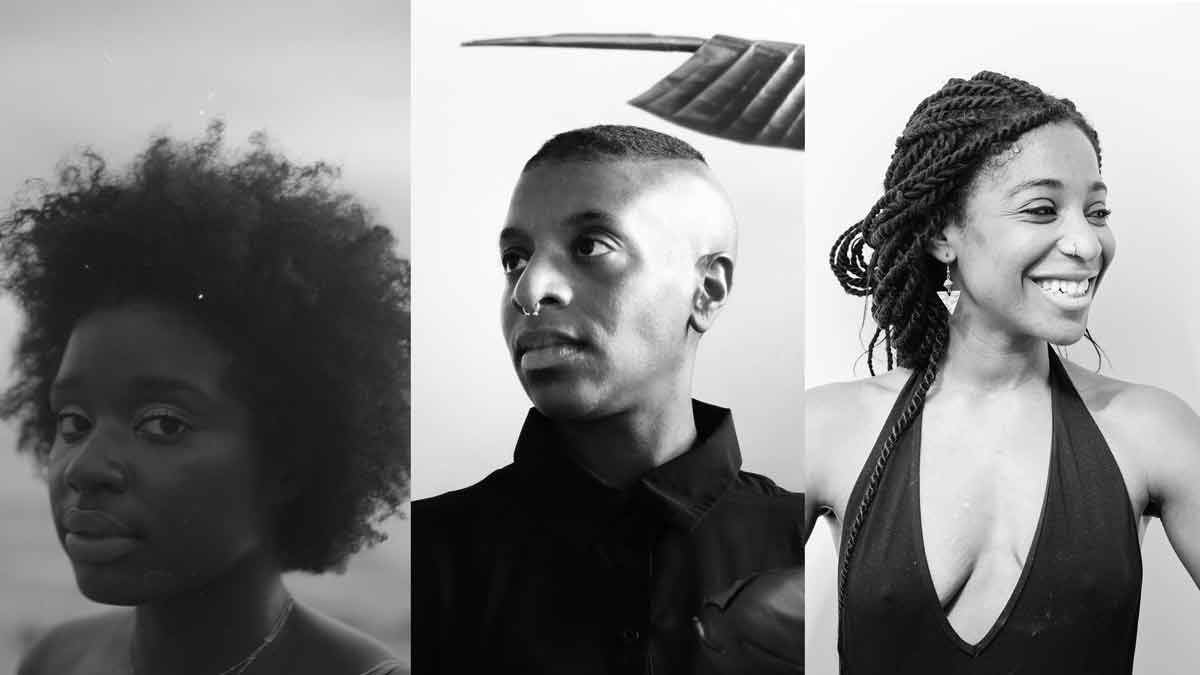 I grew up in a home where black history permeated the air. From art on our walls to curated books on our shelves to my mother’s proud afro, reminders of black beauty were present. My first Barbie didn’t arrive until I was older and my parents mindfully monitored our mostly PBS television consumption. Yet as far back as I can remember and well before I entered a predominantly white public school system, I still found myself influenced by Eurocentric features as the basis for beauty. By the age of nine I rallied hard to get my hair permed much to my parent’s disapproval. Even with all the black love around me, I desperately wanted long, straight hair. How could this be?

As I step back and look at how history informs the present, I can’t help but to reflect on the Tignon Laws of the 1700s, which forced black women to cover their hair with fabric. Their hairstyles were deemed too distracting and elaborate. The laws were an attempt to stop white men from pursuing women of color while also separating the women into a lower social class, whether they were free or enslaved. Just this one historical account of the policing of black hair let alone black bodies has called forth great empathy for my own journey towards self-acceptance along with that of my ancestors. As I reflect, I can’t help but to wonder: could the negative relationship with my hair that I experienced at such a young age be in my DNA?

As research on epigenetics continues to expand, it has been confirmed that historical trauma passed down through generations affects the expression or suppression of genes. Any outside stimulus that can be detected by the body has the potential to cause epigenetic modifications. Shame can be inherited. So it’s no wonder that even with very little outside influence as a young child I still had a desperate yearning to change the way I looked. It was if my body sent signals alerting me that wearing my hair in it’s natural state could cause me harm.

From the workplace to the classroom black adults and children to this day are denied jobs, school admittance and even athletic pursuits due to their hair. The discrimination of black hair has been so disturbing that The CROWN Act of 2019 was passed first in California followed by New York, New Jersey and recently Colorado. It’s a step in the right direction in protecting natural hair in the workplace. And while pop culture continues to appropriate black hairstyles while discrediting it’s African origins such as when Kim Kardashian referred to her cornrows as “Bo Derek braids,” the black hair movement is still alive and thriving. Black women are rising in power while rocking their natural roots such U.S. Congresswoman Ayanna Pressley who wore Senegalese twists while running for office to Academy Award winning actress Lupita Nyong’o to Miss Universe, Zozibini Tunzi who said “I came into this competition with my natural hair as a symbol of my firm belief in being yourself.” Just as the women oppressed by the Tignon laws still found a way to express their beauty and artistry by adorning their headwraps with ribbons, jewels and feathers, black culture always finds a way to defy the odds and influence the world. I can also proudly say that determination has also been inherited; to learning to love my hair, our hair despite the constant attacks. As you will read in the short essays below, we all have a story about our hair and how it is not only political but also one of the deepest acts of self love. 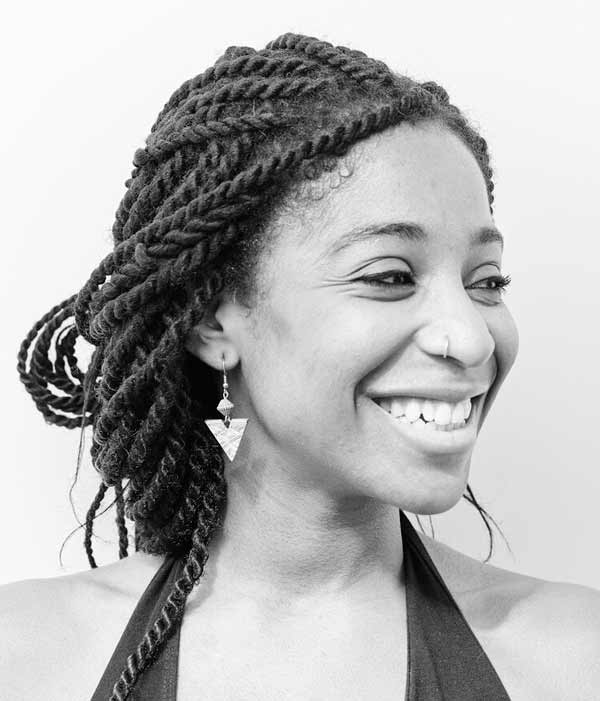 I am a Sound and Breath facilitator, yoga teacher, and Transformational coach.
My relationship with my hair is still evolving. I have parents who have always told me how beautiful my hair was but as I grew up and began to compare myself to others I started to doubt it. I never saw my hair texture reflected anywhere as an example of beauty. I begged my mom to relax my hair and used to really wish it was straight or in ringlets. Somewhere in the process of moving more deeply towards myself, I fell in love with my hair. I heard someone once say, “How divine you are… that your hair reaches for the heavens.” And now I’m considering how I’d like to express myself through my hair next. To see our own beauty and truth is a political statement. To understand our hair is symbolic of our divinity is undoing the indoctrination. It’s rebellion. So let’s get rebellious. If my hair could share wisdom with the world it would say, “self love baby.” 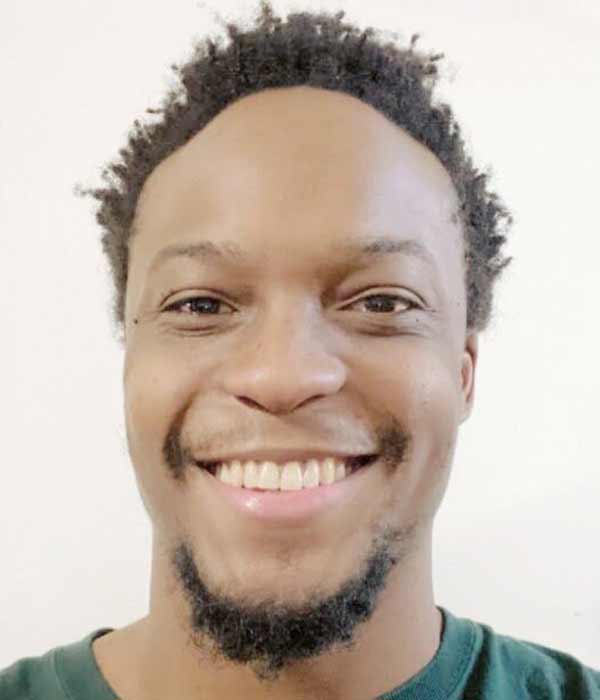 I’m a Bronx native, music lover and founder of the meditation community, Innerglow. Much of my recent work has been at the intersection of culture, wellness and community building. From a young age I internalized that my hair wasn’t beautiful. I wouldn’t let my hair get too long because that led to criticism from my parents. I spent a lot of my life in majority white spaces and through the conditioning of society and the environments I was in, I internalized that blackness meant “less than.” Allowing my hair to grow has been a part of my commitment to taking up space and letting my presence be felt. There’s a black hair revolution currently taking place which is super inspiring to me. It feels like a revolutionary act to embrace something I was conditioned to hate. I’ve had to unlearn this conditioning, and in the process I’ve made a commitment to be my full self in whatever room I walk into. If my hair could share wisdom with the world it would say, “you’re already enough.” 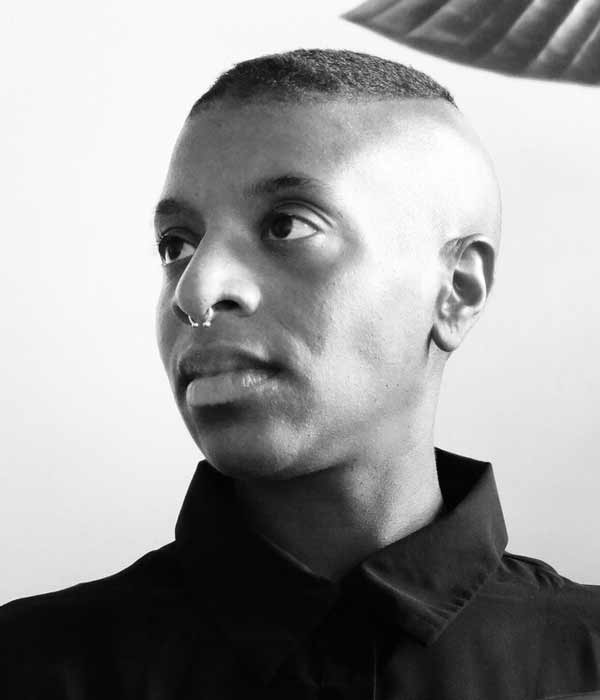 I’m an Ayurvedic Wellness Counselor, 500hr certified yoga teacher, fitness instructor and Breathwork healer. I grew up in a majority white community with very few black people and even fewer black females. Every racist comment that could be said to me has been said but the Universe blessed me with an aries moon so I always come out on top. When I think of my hair I think of it as a journey towards looking as androgynous as possible. By high school I was doing as little maintenance on my hair as possible; I basically wore a bun or ponytail for four years. In college I had locs that grew from 2000-2010. Fed up with being seen as a straight woman I cut it all off and haven’t looked back. I get hit on by cis men a lot less and most people assume I’m queer or gay or something ambiguous and I prefer it that way. I feel like I have an entire mood going on. If my hair could share wisdom with the world it would say, “Worry less about what others think.” 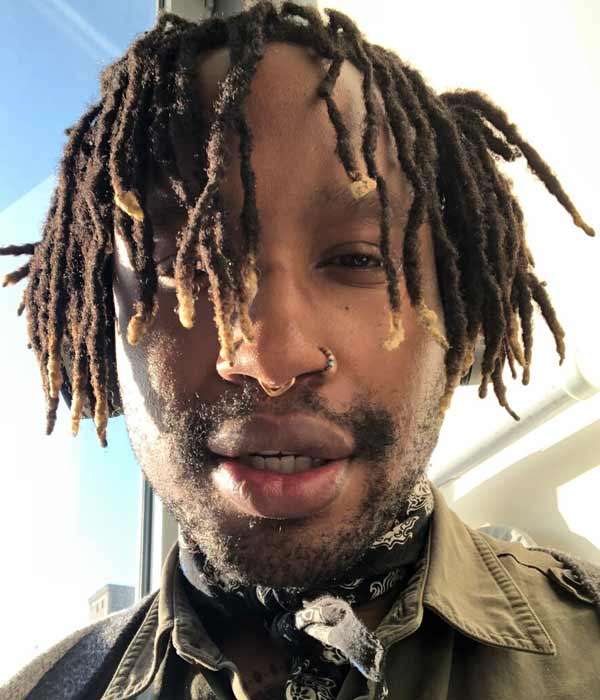 I am a creator that enjoys telling stories through an eclectic and authentic lens whether with the stroke of a pen or paintbrush or playing a diverse DJ set. I like exploring the nature of creating community and connection through art. The evolution of my hair started in my youth with harrowing bowl cuts and low caesars and fades with crazy parts to an unhealthy preoccupation with having waves. I rocked a kinky coiled mane that was once blue and also blonde. When I started going with a more natural style, I found myself increasingly fascinated and in awe of black hair and the untold stories and history that lay within each and every crown. I also enjoy the spirit of rebellion that so many natural styles evoke. I am currently enjoying the touch and feel of my locs and the sensation of my hair brushing against my skin and obscuring my face. I look forward to continuing this journey of seeing my natural hair thriving. If my hair could share wisdom with the world it would say, “find a way.” 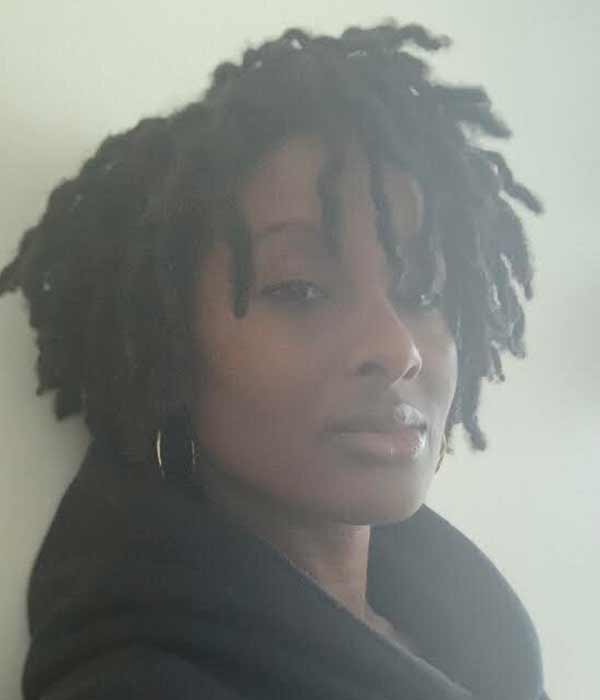 I am a Senior Merchandise Planner at The Metropolitan Museum of Art as well as a yoga and meditation teacher. My journey with my hair is the journey of being black in this world. I have been denied jobs, promotions, opportunities and relationships because of it. Falling in love with my hair has been a journey of falling in love with myself. I always wanted hair like my mother’s as hers fell into soft, silky ringlets. I spent years trying to obtain something that wasn’t mine to have. I no longer desire wavy hair like my mother. I still love her hair, but I love it on her. I appreciate the texture and thickness of my hair. Having locs gives me freedom to swim, do my hot yoga and sweat it out knowing it will always look amazing. Whether I am leading a class, leading a meeting or simply walking the streets my hair screams I am here, I belong here and you will not break or change me. If my hair could share wisdom with the world it would say, “keep your eyes on your own head; love yourself and don’t compare your hair to anyone else’s.” 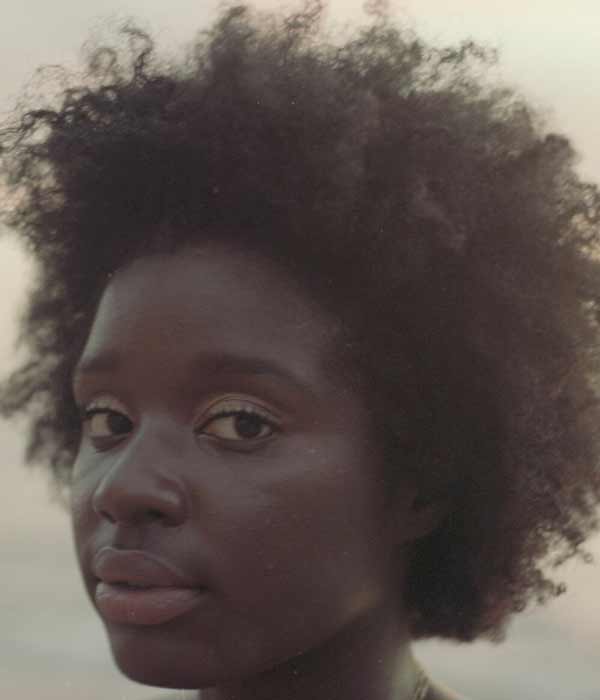 I’m a Senegalese/Liberian digital brand strangest, vipassana yogi, writer and hatha yoga practitioner. I went from an anxiety and grief stricken child to a world traveling woman. After sitting in two vipassana meditations last year I felt silly holding so much attachment. I wanted to get rid of everything from my hair to my clothes. I wanted to be seen as Mominatu the being not Mominatu the girl with the big Afro. So I chopped it! I’ve shaved my head now three times in my life. I’m currently in a bit of a transitional period. I’ve been finding it hard to feel beautiful in the “in between phase” but I’m looking forward to my hair growing back in all of its glory while appreciating it for where it is now. My biggest accomplishment thus far has been breaking out of my own cocoon that was self doubt, worry, and fear. I now, spread my wings using my voice to empower young black women to escape their cocoons as well. If my hair could share wisdom with the world it would say, “my value doesn’t decrease based on your inability to accept my freedom.” 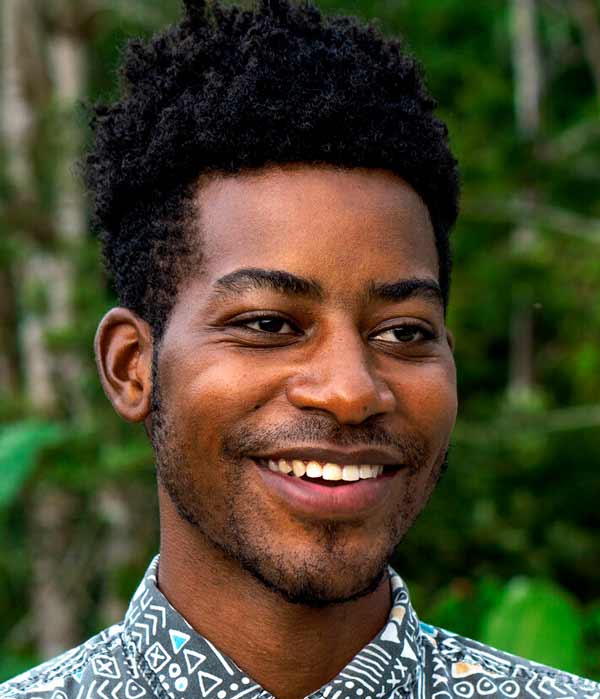 I am a creative visionary and engineer. My spiritual journey has taught me that I am never without as long as I am whole within. In contrast, as a person of color the marathon continues. The women in my family made sure I always looked groomed because being clean cut was seen as socially acceptable as a black man. Towards the end of my college experience, I began to redevelop my relationship with my hair. There is such deep fulfillment in being reunited with all aspects of yourself. I currently let the top grow and keep the edges lined up and the follicles moisturized. I’ve been learning to love how my hair looks, even in the struggle phases! I see my hair as an extension of my identity, power and essence. I also LOVE to play in my own hair. If my hair could share wisdom with the world it would say, “Patience is required along any journey. If you wish to grow you must show up each day, nurture the roots and reach for the Sun.”