Kiran Gandhi: Drumming with a Purpose 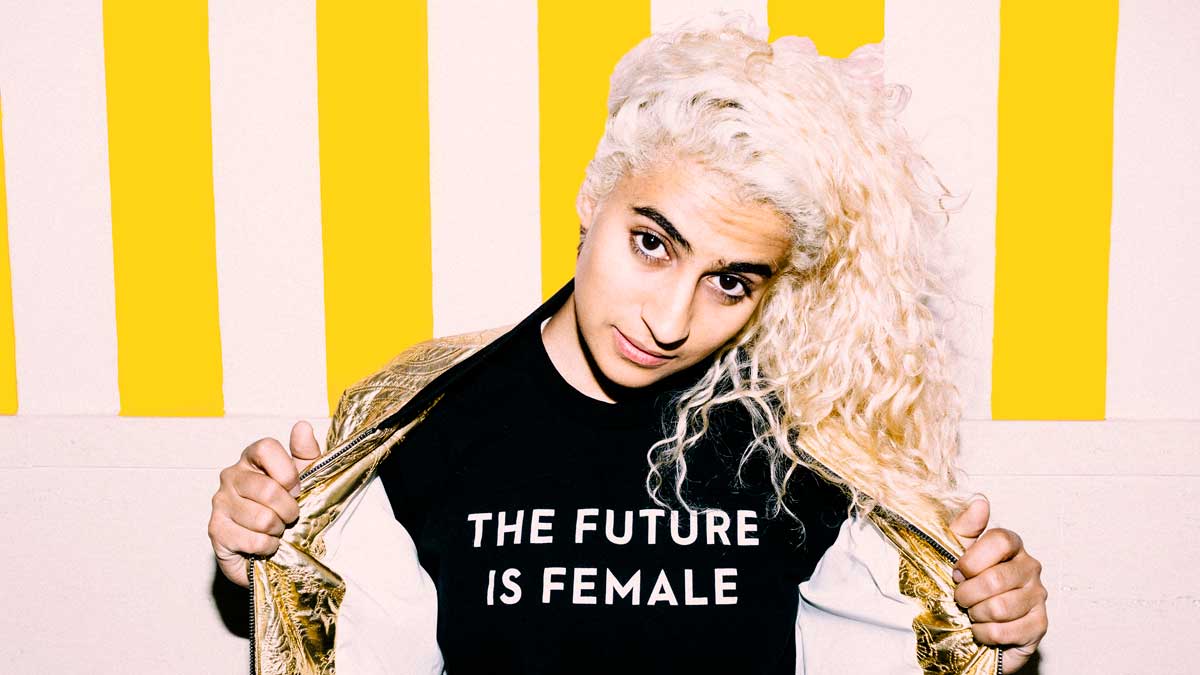 Kiran Gandhi does it all. She toured the world as MIA’s drummer while pursuing an MBA from Harvard University. While running the 2015 London Marathon, she made global headlines for free bleeding (menstruating without the use of pads, tampons, or panty liners). She’s a feminist activist who channels her passion through song lyrics and speeches. Kiran credits her accomplishments to what she calls Atomic Living. Kiran’s focused on identifying what she’s truly passionate about: drumming, feminism, friends and family, and the music industry. When opportunities come her way that could potentially nourish one of those four pillars, Atomic Living tells her to say “YES!” and she goes with it. This way of living allows her to be present in the moment and contributes to her creativity.

What does creativity mean to you?

Creativity is the ability to have the clarity to let your fullest self be expressed. It also means being able to shut out the surrounding influences and really assess what we think or feel. That’s part of the reason why, as a creative, I prefer to live in a place like LA. Now I even see a lot of New Yorkers going to places like Beacon or Hyde Park because sometimes when we are too stimulated by things around us, it’s difficult to access our inner creative spirits and inner creative thoughts. Creativity is also when you’re able to provide a new perspective that’s different than what’s around you so you can inspire and challenge others.

How do you shut out those external influences?

For example, one day I promised to meet some people at our local farmer’s market, then I realized I really needed to write and work on music at home. I didn’t feel the need to exchange external energy. Having the courage to accept that, without feeling obligated to say something that didn’t feel right to me, is very important. That’s not a selfish or egotistical thing; it’s more honoring and understanding myself so that I can actually be better to those around me. I don’t really book that many meetings. I try my best to spend time alone so that I can actually hear my thoughts. I think that’s why people like yoga and meditation. It’s the same idea.

So many people are terrified of that alone time that you’re talking about.

They are. At a recent show, I realized I only had five minutes left, but I wanted to share something with them. In a yoga class the day before, the instructor said “Let the blood rush to your pituitary gland, your third eye, your intuition, where you’re never wrong”. I was so obsessed with this because we question ourselves all the time. We’re afraid of being wrong and hurting ourselves or others. But at the same time, I do believe that those who practice meditation and yoga are so in touch with their own energetic flow that they know very clearly what they need to do, where they need to be, and what they need to say no to.

You mentioned the importance of being cognizant of how you spend your energy. How do you balance that with what you call Atomic Living?

It’s the exact same. It’s all connected. Atomic living is exactly what my yoga teacher said: listening to intuition. For so long, humans, especially women, only had their intuition. Think of motherhood. There’s no manuscript telling you what’s right or wrong. You just exist based on your intuition. You have a feeling through your own anatomy that your child is hungry, so you feed them from your own body. It’s so pure. Then in the 1200s, missionaries came in and told humans they need to listen to God. They told us to put our faith in something external instead of internal. This teaching shows up everywhere. We still look for external validation through Facebook. We look for the answer by Googling it. We look for hope by praying to God. While prayer is powerful and it helps millions of people, I don’t think it should come at the expense of being able to listen to our own intuition. When we say “The Future is Female,” it means returning to that place of trusting your own intuition.

If we go against the grain or that typical way of thinking, we’re thought of as weird.

Look at the greatest leaders of our time; those are the people that listened to their gut. In the short term, they set back challenges and exclusions and even death threats. In the long term,  they’re ones who push our society forward.

b>Most people don’t think that they have the capability to be that great. We often idolize celebrities or profound leaders from the past and think “I can’t do that”. They’re just people, too! They’ve learned how to ignore the haters and listen to their intuition.

Absolutely. I spread this message in my lyrics. In one song, I say “Own your voice, don’t be afraid.” In another song, I say “I own my voice, I am not afraid.” I say it over and over again because it’s so powerful. It can be something as simple as not telling their boss what they think because they’re afraid or something as extreme as sexual assault and rape victims not feeling confident enough in our society to speak up against right and wrong. A capitalist society depends on people not listening to themselves. The majority of us knows better. We know better than to idolize someone because they have fake breasts. We know better than to value ourselves based on how we look. We know better than to smoke or drink. But capitalism depends on us to ignore those things, to feel bad about ourselves. It’s a toxic system.

Speaking of business, I think a big miss with struggling artists is that they don’t see themselves as entrepreneurs. Would you agree?

Artists recognize that creativity and doing something pure at heart shouldn’t be tethered to material wealth, so they shy away from the business based on a stereotype of capitalism. I believe that artists need to be able to receive the value that they’re giving. We can exchange value in different ways. This is a materialistic example, but sometimes when you’re making art, you need material things. I recently went into a store that sells beautiful sunglasses. I told them I’m making music video and I’d love to be able to place their glasses in a shot because they’re so cool and really on brand for what I’m doing. I let them know that there was no money at all, but I used to work with MIA and we have a big press partner, so it could a good opportunity for them, too. When I teach artists about business, I don’t teach them about greed or corruption, I teach them about how to understand the exchange of value.

When I speak about change and social justice, I talk about my four levers of social change. People don’t think that they can make a difference for various reasons, but actually, we need all four of the following to make any kind of social change:

How does feminism fuel your creativity?

I think of my creativity as the method through which I express my beliefs on women’s equality. I believe we still live in a world where a woman is a second class citizen. I use my creativity in an innocuous way to inspire change. If I were to be a lawyer or politician and say the things that I believe, it would make people afraid or repulsed by my ideas. But I say the exact same thing and express it through art and music. Because art and music don’t exist in our official channels, a lot more can pass through. Artists impact people so much more than politicians because art caters to people’s emotions first.

7 a.m. yoga – that’s my jam. I don’t have a “job” that I have to wake up and go to, so creating this has been an anchoring point for me. It keeps me from drinking the night before. It makes me go to bed early. It makes me start my day at 8:30. I feel like my limbs are stretched out. I feel like my physical well being supports my mental well being. There’s oxygen getting to every fiber in my muscles. The meditation I do doesn’t happen by sitting still in silence. It happens at two specific times. It happens when I’m driving. I get the chance to zone in on what I really want. I’ll take notes and send myself reminders from that time. Another time is when I’m drumming. As a musician, you get to a point to where your craft becomes muscle memory.  I’m no longer addressing the learning at the front of my brain, it’s already happening. I let my limbs do whatever and my brain goes off into a thought process. I recognize that most schools of thought for meditation are about clearing your mind completely. The way I think about it is clearing external stimulation completely so that I can hear myself. Maybe I still have work to do when I access one level beyond that, which is complete blankness of the mind, which is a very Indian school of thought.

A lot of people do find peace through stillness. It sounds like you find meditation in movement. The beauty of meditation is that there’s no right or wrong way to do it. Some people can sit quietly for 20 minutes and feel recharged. For you, maybe you get that from drumming.

Learn more about Kiran Gandhi and Atomic Living on her social media channels: 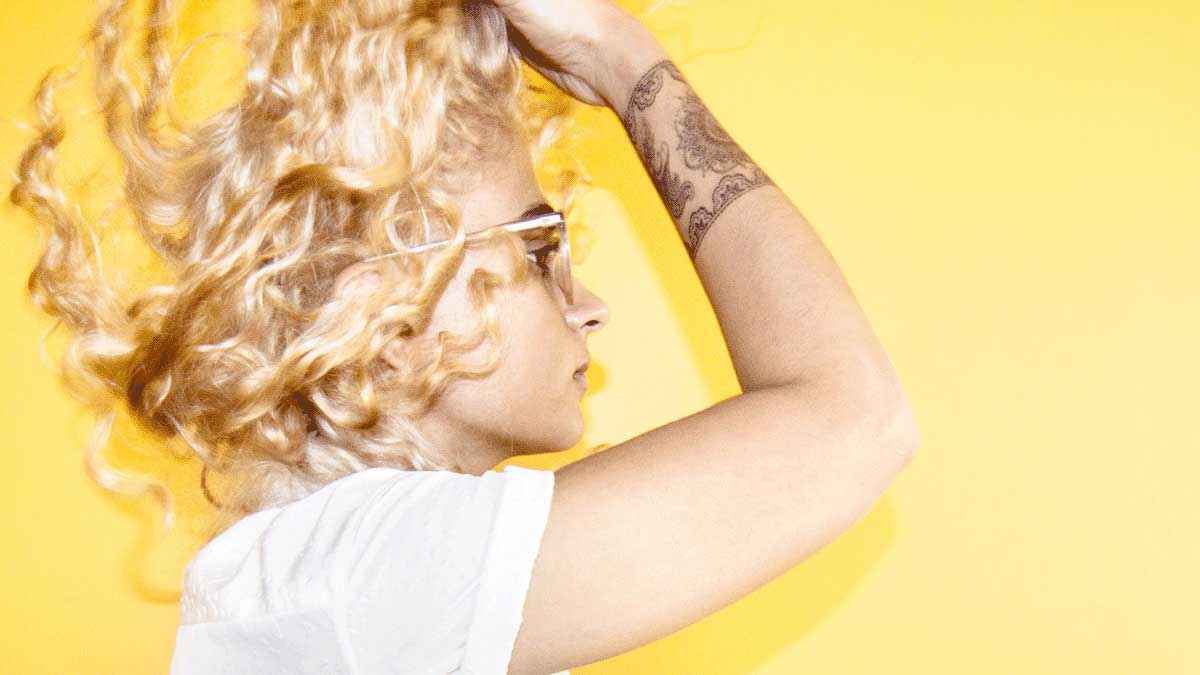